Kids like teddy bears, am I right?  My boys have several that they have collected over the years: new baby is born gifts, gifts from doting grandparents, stuffed bears from hospital trips, the list goes on.

Cute kid with teddy bear to prove my point.

Cody’s favorite stuffed animal, hands down, is a purple and white stuffed shrimp whom he named Kissy Shrimp.  I bought the shrimp during a mad purchasing flurry of underwater-sea life themed items for his bedroom when we finally moved the crib out of our room and into his very own.  I found it at a local thrift store, took it home, washed it, and he has been attached to it ever since.  That was about four years ago.  He has other stuffed animals that are near and dear to his heart.  Tom, is a five foot long crocodile who wears a blue and white poka dot shirt.  He tends to get used more as a fire hose these days and less as an actual crocodile.  There is also a parrot with a multi colored tail and an armadillo named Arnold.

Cody and Kissy Shrimp. Please disregard the general household chaos in the background.

Carter has several bears that get played with, one normal sized bear named Big Bear and two smaller bears named Bear and Other Bear.  They dance and play games and sometimes get invited to picnics.  They are no match for Zebra or Snake.  Both of these stuffed animals were impulse purchases.  I grabbed Snake from a local gift shop as a last-minute stocking stuffer two Christmases ago and Zebra was another random thrift store find.  I can’t help but love that my boys have attached themselves to these rather unusual stuffed animals. 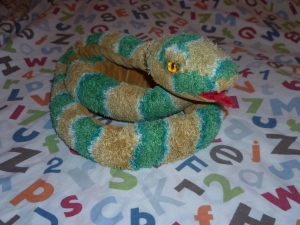 Hiss! What's not to love about Snake?

Other resident stuffed animals include a large orange and white polka dot hippo, three large sea stars, two horses, a small cow, a tyrannosaurus rex, an elephant, and an iguana.  Anyone out there have a favorite stuffed animal of the non-teddy bear kind?

I am an elementary school teacher, a former microbiologist, a mom to a herd of two boys, and a grilled cheese sandwich and beer connoisseur.
View all posts by Shoes →
This entry was posted in Little Feet and tagged bedtime stories, stuffed animal, Teddy bear. Bookmark the permalink.