In our classroom today we were suppose to be comparing two different texts with similar themes.  The story today was of a boy named Carlos who started out really wanting a particular breed of dog.  As the story progresses, the boy finds out by working at an animal shelter that it is not the breed of the dog, but the dog’s personality that truly matters.  We were going to compare that to the drama of King Midas and his wish for the golden touch but we never made it that far.

Instead the discussion of blanket judgements and preconceived notions ensued.  Pretty heavy stuff for a class of third graders.  We talked about how dangerous these ideas can be.  We nitpicked the wordage one uses when talking – how saying “my religion is the right one” is so very different than saying “I believe in my religion”, (believe it or not, this was an example from a student, not one of mine).

One boy commented that such thoughts can spread.  Another brought up racism.  And yet another tied in human’s fears and judgements of sharks to the ugly practice of cutting off their fins and leaving them to drown – all for a bowl of shark-fin soup.

I am pretty good at traveling sideways with my class.  There is a time to stay on topic and a time to know that the destination of what I call sideways travel, is more important that the preassigned learning objective that is neatly tied to a common core state standard.

Today we traveled sideways.  And it was good.

Although at one point we did travel a bit too far when one student tried to tie in seeing a seal sunning itself on a beach with the shark topic.  She held up her arms, one arm up and out and the other crossed over her face, to mimic the sleeping seal.  Upon seeing this, a boy piped up, “So the seal was dabbin’?!?” 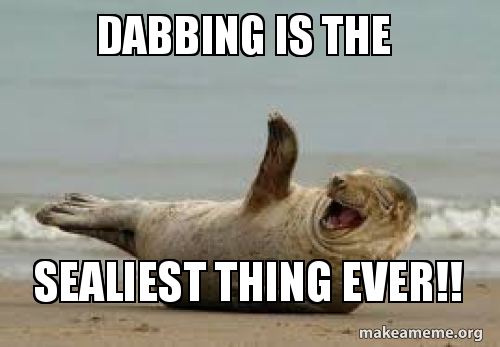 I had to turn my back on the class so they could not see my muffled laughter.  When I turned back around, I nudged the conversation back to Carlos and his dog.

I am an elementary school teacher, a former microbiologist, a mom to a herd of two boys, and a grilled cheese sandwich and beer connoisseur.
View all posts by Shoes →
This entry was posted in Being a Teacher and tagged Common Core State Standards (or not), Dabbing, Humor, Teaching, The Dab, The things kids say, Third Grade, Traveling Sideways. Bookmark the permalink.