Welcome to The Magical Taste Shop

If you had chanced to drop by our little house in the woods last week, you may have been surprised to discover that in the place where our house usually rests, you would have found what appeared to be a restaurant.  Above the warn and curl-edged drawing Carter created and taped to the front door a while ago of two stick figures, who happen to have very large heads and speech bubbles with “I *shape of a heart U” that I am sure has confused the UPS man a time or two, was taped a sign you would typically see when entering a restaurant.

When Husband got home from work, he was greeted by this welcoming sign and two boys eager to seat him at the dining room table.  Hardly had he a chance to put his keys down and have a seat, but a menu was thrust into his hand and he was told to order a smoothie.

For what Husband has unknowingly stumbled into was The Magical Taste Shop, a shop that specialized in smoothies.  The waiter waited in the kitchen practicing his waiter skills while Carter practiced, well, whatever that is he is practicing.

When it looked as if the customer had made up his mind, he was given a post-it note on which to write down his order.  This was delivered, via waiter, into the kitchen to the waiting smoothie making staff. 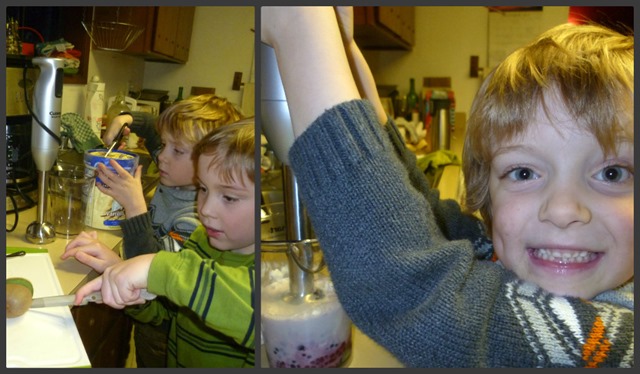 The waiter, now confident in his skills of balancing his clipboard, er, um, I mean tray, set off across the carpeted dining area while the smoothie supervisor, that’s me again, stood ringing her hands and hoping he would not trip.  He did not.

The customer enjoyed his beverage and surprised the waiter and the smoothie chief with a dollar tip for each of them.  The smoothie supervisor was promoted to chief and waiter and happily created made-to-order smoothies for all.

While we sat eating our smoothies, the conversation turned to what we thought Haley, our dog, would like if she were given the chance to order a smoothie.  This is what we came up with.

Some of these items, well actually all of these items appear to be off menu so apparently there is some flexibility in what you may order although I imagine there would be an additional charge for this service.  And I am not really sure we do rabbit… 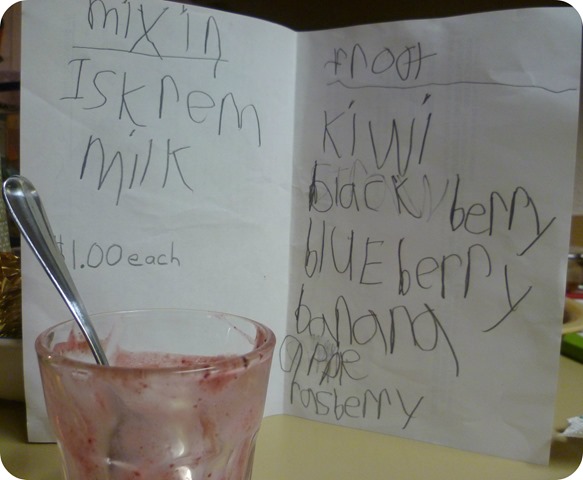 I am an elementary school teacher, a former microbiologist, a mom to a herd of two boys, and a grilled cheese sandwich and beer connoisseur.
View all posts by Shoes →
This entry was posted in Food Glorious Food, Little Feet and tagged Children, Food, Humor, Immersion Blenders are Great, Kids, Life, Restaurants, Smoothies. Bookmark the permalink.

10 Responses to Welcome to The Magical Taste Shop