My WordPress Therapy – Session One

Yesterday I was reduced to gut wrenching sobs and mindless pacing in the back corner of our local Office Depot.  I was planning to make a quick trip to pick up colored laser printer paper while both boys were at school.  Then my phone rang and I saw it was my mom who rarely calls because she worries that she will call at the wrong time.  I hesitated, my finger over the answer button, but in the end I answered the call.  If I would have told her I was not at home I am sure she would not have asked me to talk to him.  I am sure of it.  She asked if I had a minute to which I replied that I did.  She explained the situation and handed the phone over to dad.

My dad was in a panic, worried and scared.  He was buying a house and was afraid that the nice people who were at his house were trying to rip him off.  He did not recognize my mom, his wife of almost forty-six years.  In his mind she was the seller of the house, the house I grew up in where he still lives with my mom.  In his mind she was a man (just to add insult to injury here, my mom had a mastectomy and went through chemo, loosing her hair, in the spring of this year.  This may add to his confusion, or not.  We don’t know.)  He wanted to talk to a lawyer but settled for me since I am named executor on their will and he still remembers who I am.  And he still trusts me. 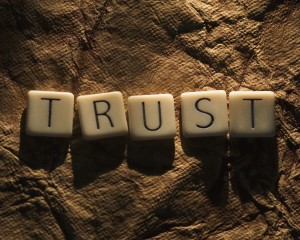 I am not sure I deserve his trust but when we tell the truth it quite often makes it so much worse...

So I tried my best to hold back the pain and tears and I talked in a reassuring but hopefully not condescending voice.  And I lied.  Over and over I lied.  And it was awful.  I told him I was actively involved in their finances and that I would make sure everything would be alright.  I told him I would look over the papers to make sure everything was in order.  He kindly offered to pay for my phone calls if I needed to call any lawyers.  He did not want to hear that the house he thought he was buying was the same one he had bought over forty years ago.  He did not want to talk about mom, but he did want to know where she was.  He thanked me for talking to him and told me he loved me.  I told him that I loved him too.  I told him over and over throughout the conversation that he was with people who loved him and that he was safe.  At least that was not a lie.  I spoke to my mom for a few minutes and then hung up and completely lost it.

I don’t know what to do about all this but it helps to write about it and put it out there.  My life is big and great and more than Alzheimer’s and the sense of hopelessness it brings me.  But it is a part of my life.  So I will dedicate a category to it, My WordPress Therapy Couch, and title them My WordPress Therapy with session numbers.  Humor and grief, if just the right mix, sometimes go well together   If you are looking for a fun story about my boys and you see this title, well, I suggest you check back another day.  There will be more hilarity and crazy to share with you, how could there not be with two little boys, two dogs and a stuffed animal named Kissy Shrimp?

I am an elementary school teacher, a former microbiologist, a mom to a herd of two boys, and a grilled cheese sandwich and beer connoisseur.
View all posts by Shoes →
This entry was posted in My WordPress Therapy Couch and tagged Alzheimer's, Because real therapy is expensive, Family. Bookmark the permalink.

28 Responses to My WordPress Therapy – Session One