The Worst Day of My Life

Six years ago today our first child was born.  It was an emergency C-section.  I was twenty-six weeks pregnant.  We ended up at the hospital because I had spotting and intense lower back pain.  The nurse on the phone did not sound too concerned but told us we should go in and be seen.

I was almost fully dilated, forty minutes later when we arrived at the hospital.  Fetal monitors were hooked up and while the nurse went off to find someone to catheterize me (to get a blood free urine sample) my water broke.  Only I did not know what had happened, I just knew it was not good.  I grabbed Husband’s hand and in a voice filled with fear and panic I told him something happened!  Husband ran out into the hallway and called out something happened! and the fear and panic that was in my voice was clearly reflected back to me in his own.

There was a flurry of activity.  My midwife was there but so was some man I had never met, dressed in street clothes with a backpack on his back.  It was Easter Sunday and he was a doctor who was getting ready to go home to his family for the night.

They poked and prodded and declared our son frank breech.  I started to babble on about our birth plan and wanting a natural birth and couldn’t they just turn the baby.  I could not process what was happening, what was about to happen.  Then his heartbeat was lost.  They could not find it.  It was firmly and quickly explained that they needed to get the baby out, even though he was coming way too early, and we needed to get to the operating room right now.

The side railing went up and my bed on wheels was pushed.  They were running and we ran into the wall at least once while rounding a corner.  Husband was running along side and he was crying.  One of the very few times I have ever seen him cry.  I told him call my mom.  And then the doors were shut.

They draped a curtain across my body, midline as if my lower half needed privacy from my upper half.  The energy in that room was electric.  Something cold was rubbed on my stomach and people were leaning in, as if ready to cut but I was still awake.  The anesthesiologist was not there.  I actually asked you are going to wait for the anesthesiologist, right?  And then he was there with a mask and I became gone.

When I woke up there were nurses and doctors and they were trying to give me pain medicine.  I kept refusing.  No, no drugs, I don’t want any drugs, I wanted a natural birth.  I kept asking for Husband and only when he came would I accept their drugs, accept that nothing was right and everything was wrong, so very, very wrong.

The first time I saw my son he was in an isolette, the kind with the little doors on the side to stick your hands in.  There was a team of at least six people attending to him.  I was able to touch him, with one finger, for less than a minute before he was taken away and transported to a nearby hospital with a NICU level of care facilities he required.  I told Husband go with him, be with him, I am ok.

I was not ok.  I was shown how to use a hospital grade breast pump, the object of loathing and the source of pain both physically and emotionally for months to come.  I laid in my bed listening to new moms and the crying of new babies and I cried.  Husband came back late in the night with two polaroid pictures of our son.  He curled up on the bed with me and we just were.

Cody spend two months in a level three NICU where he had a total of five surgeries, one involving his heart, the others to address a severe brain bleed he experienced at 48 hours old.  It was not the surgeries that were the hardest, although those were awful.  It was the minutes in the day.  It was all the time his heartbeat would go too slow, it was the infections, the skin sores, the constant fear that one system or another in his body would go wrong.  He spent an additional two weeks at a hospital with a level four NICU after several nurses and one doctor hinted at the fact that we had a right to a second opinion regarding further surgeries that were scheduled to be done by a neurosurgeon we were rapidly loosing faith in.

Six years ago Cody was born at twenty-six weeks gestation.  He was two pounds one and a half ounces and fourteen inches long.  For many weeks we did not know if he was going to live.  Once we were fairly certain he was going to make it we did not know at what level he would function.  Would he ever be able to care for himself, live a normal life?  It was at least a year, maybe two, before we could could even start to breath easy.  I did not bond immediately or well with that little baby of ours.  Perhaps it was a defense mechanism on my part or post partum depression but whatever it was filled me with guilt and left me feeling like a lousy mother.  There were no indications that I was going to have a high risk pregnancy.  I took care of my health, read the baby books, and carefully planned to embrace this thing called parenthood.  No matter, for even today I still have lingering guilt and question just what I could have done differently.

Cody is not your typical six year old.  He has a VP shunt that allows his cerebral spinal fluid to flow from the area surrounding his brain down into his belly.  Without it the pressure would build up in his head causing brain damage and/or death.  We have been told that these basically have a 100% fail rate and so we are always on the lookout for symptoms of a shunt failure.  Cody has mild cerebral palsy, has balance issues, and walks with a notable gait difference (this is a nice way of saying he walks with a limp.)  When he gets sick, quite often he will have a seizure.  He is delayed in his fine motor and gross motor skills.

No, he is not your typical six year old.  He has been through a lot and he has rallied.  He is smart and creative.  He is kind and empathetic.  He is inquisitive and logical.  He is sweet and funny.  He sometimes seems wise beyond his years.  He is perfect.

And so while the day of his birth was one of the worst days of my life, I think of his birthday as one of joy, reflection, and of what can be. 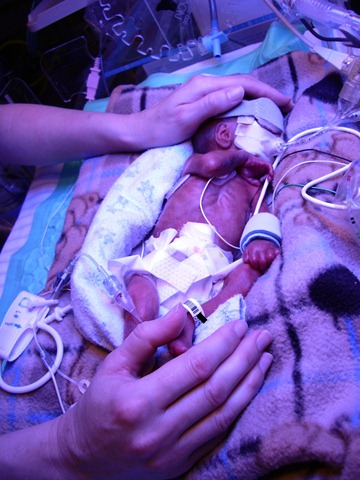 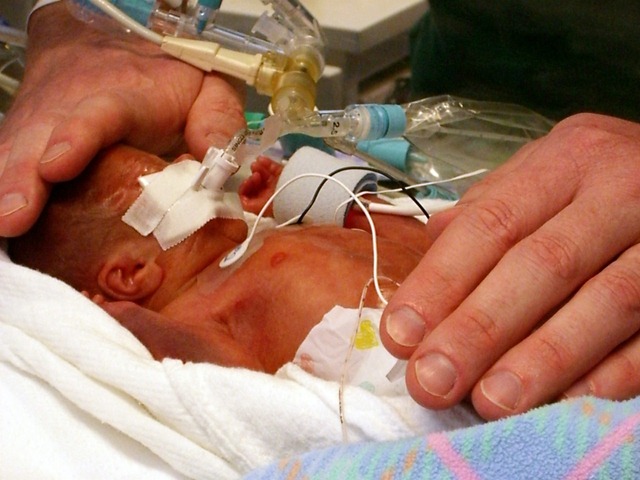 The first three pictures are when he was less than a week old (the top two are with my hands the others are with Husband’s hands.)  The last picture is from when he reached the two week mark and had already been through two surgeries.

I have written and rewritten, cut parts out and changed wording but still the words just cannot capture the experience of having a medically fragile baby.  Unless you have been in a NICU, have invested your heart and soul into such a tiny and delicate being, there is no knowing.  I don’t think any amount of words can portray how Cody’s birth has changed me.  Just as there is no way to get a true sense of the grandness of the Grand Canyon by simply looking at pictures or reading a book, there is no way I can fully share with you the grandness of this day of six years ago.

76 Responses to The Worst Day of My Life