I don’t know about you but when I hear about a child being abducted, it chills me to my core.  When I hear that the child was abducted by family, for wrong or right, it lessens my horror, especially if the child was taken by the mother.  I jump to conclusions and think bad thoughts about the father.  In my mind there is a cloud of suspicion over the father because why else would the mother leave with the child but to get out of an awful situation.  What was he doing wrong?  Was there abuse going on?  My mind goes to dark and scary places.

I have recently concluded that this thought process of mine is wrong and I feel ashamed for ever thinking such thoughts.

Several days ago a grown man who Husband and I barely know stood in our living room unsuccessfully fighting back tears.  His words at times came out nothing more than a strangled choking noise.  He would turn away, try to compose himself, so as to continue on.  Mr. Neighbor Guy has been awarded full custody of his daughter, the only problem being that he has know idea where she (and her mother) are.  We know this not only because he told us but because of that cloud of suspicion I had cast over him caused Husband and I to do a bit of poking around on the internet about it.

As I briefly mentioned in my previous Cat Conundrum post, Mrs. Neighbor Lady took their daughter on what was presented to everyone as a three week long trip to Arkansas with her mother and step-father.  That was six months ago.  At first the communication between Mr. and Mrs. Neighbor was cordial and at one point she invited him to join them but, she told him, she was not coming back.

The whole thing plays out like a heart wrenching made for T.V. movie:  mother takes child across state lines to live with her mom and step-father so as to raise the child in what sounds like a religious cult.  The father tries to get her to come back or to at least be granted visitation rights.  There is a court date set and then another where the mother does not show up.  Time passes.  The courts grant the father full custody.  The father gets a notice in the mail that his home has been sold to an entity in Arkansas and he must move out in thirty days.  The mother takes the little girl and goes into hiding.  The Arkansas police get involved as well as a private detective hired by the father.  The step-father, grandfather to the little girl, is questioned for hours; he remains silent the entire time but to the father he flaunts his knowledge of where they are living.  Finally overcome by grief and frustration the father tells his work he needs an undefined amount of time off, buys a plane ticket, and goes to Arkansas.  He left yesterday.

How does this affect us, their next door neighbors?  It affects me on many levels but the one I want to focus on, because it is the most concrete and the thing I have the most control over, is their pets.  They had two cats which means that we now have two cats.  Delilah has been living with us for a while now and since we knew of the situation next door we were prepared to take their other cat Bleu.  Bleu is slowly warming up to us but he is also very skittish and, lets face it, probably pretty confused about where his people went.  His house is empty now, the garage where his bed and food was has become a storage room. 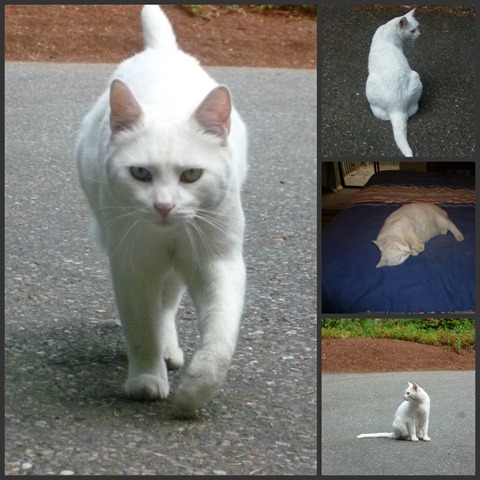 In order to entice him to call our home his, we have been leaving out fresh water, giving him space but lots of attention when he wants it, and cat treats too.  We bring him in the house and let him explore.  We shut him up in the back room with food and a litter box but he did not like being all alone so we let him out to wander.  Dexter, our dog, is used to living with cats but these ones are new and he is old  and grouchy about the entire thing.  He barks, he growls, he puts on a good show but his arthritic hips considerably cramp his performance.  The boys think it is great and have to be reminded over and over again not to smother him with love.  Poor cat.

Bleu has adjusted better than I thought.  We let him in whenever he is found lurking around by the front door.  He eats, hangs out, and has figured out the doggie door to let himself out.  I really wish he would use the litter box so I could rest easy that I will not find a surprise in the corner of the closet.  We are all adjusting to the extra family members we have acquired and the ghosts of their former family members lingering just off to the edge of our vision. 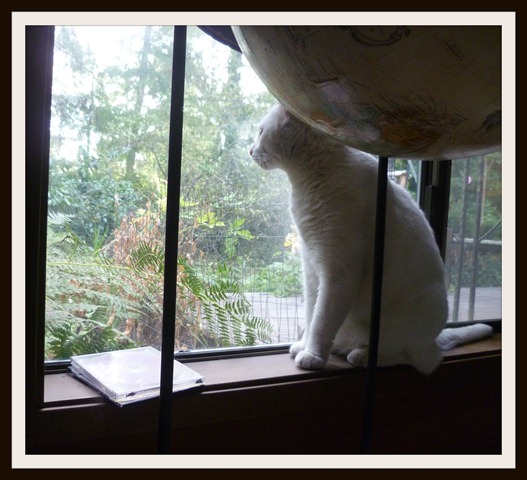 Oh, and did I mention they also had two fish?  Yeah.  I am not a fish person but since Mr. Neighbor Guy made an off handed remark yesterday about how he would have to give them the big flush, what could I do?  I am just glad they did not have a pet goat (actually I would love to have a pet goat but I think Husband would protest.)

In all seriousness, I want to pass along the link to the National Center for Missing and Exploited Children where you will find Mrs. Neighbor Lady and her daughter.  Please share this link, especially with anyone you know living in Arkansas or the surrounding areas.  I am not one for soapboxes and I am not sure I really want my blog associated with this mess of a situation, but it is what it is.  Perhaps you can share the attached link through your email, or on your blog, or your Facebook account, or Twitter, or any of the other social media the cool kids are using these days and simply leave my blog out of it.  I would prefer not to draw the attention of some of the people involved in this case but I also feel compelled to put it out there and hope for better things for this family.

I am an elementary school teacher, a former microbiologist, a mom to a herd of two boys, and a grilled cheese sandwich and beer connoisseur.
View all posts by Shoes →
This entry was posted in Random Thoughts and tagged A surreal situation right next door, Children, Family, Kids, Life, Pets, Putting it out there in hopes of better things. Bookmark the permalink.

17 Responses to The Cat Conundrum Continues