There’s a Hole in My Roof and Feathers on My Ceiling?

It started several years ago.  In the rainy season the skylight in our bathroom would leak, a little at first and then nothing.  The following year, a little more and then nothing.  Each year the leak would yell a little louder and stay around for a little longer.  Every year we would think to ourselves we really need to get that fixed.  But then the leak would stop and other projects would pop up to spend our monies on.

This year the little skylight declared that it was time.  The leak that could be contained by a small Tupperware container on the floor for a day or two became one that needed a full size cooler sitting under it.  During the weeks (yes that is an “s” on the end of the word “week”) of the cooler, using the bathroom was almost impossible.

Our bathroom is small.  There is a tiny shower, a toilet, and a countertop with one very outdated sink.  The cooler took up about one eighth of the floor space – the eighth directly in front of the toilet.  When the cooler was in place the bathroom door could not close nor could the shower door open.  It was inconvenient to say the least. 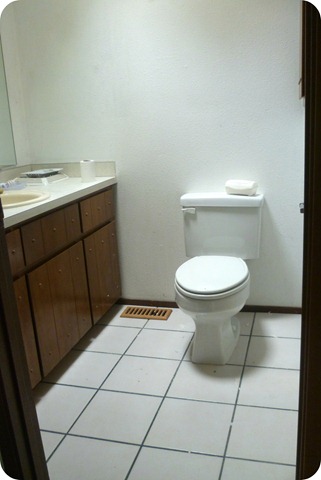 It was the bowing of the ceiling drywall that forced us into action.  Well, that and the daily dance of the cooler.  Every time I used the loo, I feared the roof would collapse.  In the end nothing that dramatic happened.  We have a new skylight and our contractor just applied the second coat of mud on the new drywall.  He will be putting in crown molding and has talked us into some inexpensive cherry cabinet faces to replace our old nasty 1980 ones.  I am quite excited.

And here is where I decide that since my classes have not started yet, now would be the perfect time to fully remodel the bathroom.  I figure I may as well do it, come April I won’t even have time to finger-paint much less paint an entire room.  I have pulled out all my painting supplies, brought in from the garage my two gallon bucket of Kilz2 Latex Primer so it can warm up, and have located my trusty TSP Substitute.  Tonight after the boys’ swim class we are off to Home Depot to find the perfect paint.  I am thinking something in the pale slate gray family for the walls and an off white cream for the ceiling and trim.

Carter told me he thought orange paint with pink feathers glued to the ceiling would be nice.  Cody likes Carter’s pink feather idea but thought that pink paint on the walls would better compliment the feathers.

I am not sure what we will decide but I am pretty sure it will not involved pink.  Or feathers.

I am an elementary school teacher, a former microbiologist, a mom to a herd of two boys, and a grilled cheese sandwich and beer connoisseur.
View all posts by Shoes →
This entry was posted in Random Thoughts and tagged Children, DIY, Family, Home, Humor, Kids, Life, Painting, Remodeling. Bookmark the permalink.

15 Responses to There’s a Hole in My Roof and Feathers on My Ceiling?