Boobs are for Ladies

Carter turned up his nose at the thought of making our own birthday invitations and instead wanted to go to the store and buy some. 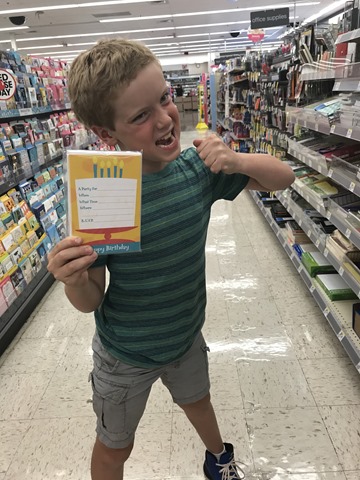 Carter with his invitations hamming it up.

We found our invitations and were walking past the rack of cards on our way to the register when we got sidetracked.  A cute card of a little dog holding a little suitcase in his mouth next to  a big dog holding a larger suitcase in his mouth, caught my eye.  I opened it – It is not about where you travel, but who you travel with – something like that was the message.  I turned to share it with Carter at the exact same time he turned to me to share the card he was holding.  I let him share first.

His card had a checklist on the front :

(The message being that the person whose birthday it was, had the same checklist now as when they were twelve.)

He stumbled over the last word, perhaps unfamiliar with it (and due to the fact that phonic is not his strong suit.)

He asked me about it.  I brushed it aside, telling him some cards were not appropriate for kids.  The lady next to us snickered.

We bought our invitations and headed to the car.  As we crossed the parking lot, Carter started wondering aloud.

carter: Momma, why would anyone want to touch a boob?  Boobs are for ladies.  Besides babies drink milk from boobs so technically everyone has already touched a boob.

In Carter’s mind, the third item on the checklist was irrelevant.  That mission had been accomplished at birth.

I am an elementary school teacher, a former microbiologist, a mom to a herd of two boys, and a grilled cheese sandwich and beer connoisseur.
View all posts by Shoes →
This entry was posted in Little Feet and tagged Birthday, Boobs, Children, Humor, Kids, Life, The things kids say. Bookmark the permalink.

2 Responses to Boobs are for Ladies