When the boys were younger, we found magic everywhere and in everything we did. We danced with our own shadows while waiting at the bus stop, we named the bushes and hills that comprised our small patch of woods on our property. We saw giraffe and zebras shopping the aisles at our local Home Depot. It was more lovely than I can explain.

I think it helped that I was always with them on our outings, our adventures, simply because they were little. I enjoy the playfulness that erupts from the seemingly ordinary life moments. I have noticed that I see less magic. I have ponder this greatly knowing that, of course, these things change as children grow older, but I also wonder if I have stopped looking for or creating the shimmer and glimmer, that I don’t smudge the edges of our experiences to make them feel more dreamy or warmer then they may be to the average outsider looking in. Have I lost the magic?

A couple months ago while tucking Carter in for the night, I playfully chucked stuffed owl after stuffed owl upon his bed (he has an extensive collection). I observed that he no longer slept with his gaggle of night loving fowl. He told me that they were not the same, that he did not believe the same things about them that he used to. “They do not, any more, fly out the window on adventures while I am sleeping,” he told me. I stood there, my throat tight and dry in the way that it does when emotion threatens to overcome you. He continued to tell me that he missed being young and believing in his stuffed animals. I nodded, not trusting that my voice could crawl through my constricted throat to answer him.

I picked up Hool, his much loved and now rather scruffy, pale green owl. His brown plastic eyes scratched and dented from multiple crash landings, injuries incurred before he had mastered the art of flying, or rather, landing. Hool had been one of his favorites. While I looked into Hool’s eyes, Carter began to organize his owls, neatly lining them up in an order that made perfect sense to him.

Looking more at Hool than Carter I spoke of this shift in magic and belief. Imagination is always with you and with that imagination you can create whole worlds and characters within those worlds. They may not be real, but you can love them so much that they almost feel real. It will not be the same, you are right, but you can still wonder and imagine. You can still create. 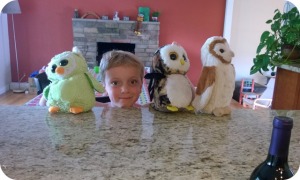 Before I left him, I cracked his bedroom window open a bit, suggesting that it would make it easier for Hool and his friends to venture out into the evening if they so wished. Carter, eyes narrowed, asked me if I believed they would; the word “believed” was drawn out and accusational.  I responded that I most certainly could imagine them doing so. With a glint in my eye, I began to unravel a story of Hool, the mischief maker, knocking loose the screen and motioning with his wing to his friends – come join me! Carter smiled and picked up the storyline.

And together we imagined an owls’ outing. 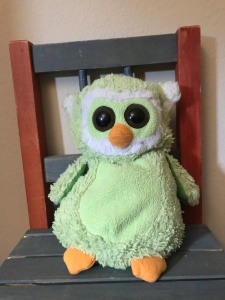 Hool, up to no good.

I am an elementary school teacher, a former microbiologist, a mom to a herd of two boys, and a grilled cheese sandwich and beer connoisseur.
View all posts by Shoes →
This entry was posted in Little Feet, Random Thoughts and tagged childhood, Growing up, Imagination, Kids, Little moments, Little things in life, Magic, Owls, Parenting. Bookmark the permalink.

2 Responses to An Owls’ Outing