A Tuna Fish Sandwich With a Side of Elephantiasis Please

At first the conversational hum was about passing the crackers or requests for a napkin.  Then, with a spoonful of cottage cheese raised half way to his mouth, Cody asked “what is diphtheria?”  Several weeks ago Cody came home from school with a new library book all about the Siberian Husky and there is a chapter dedicated to the great serum run of 1925.  What, you don’t know what that is?  Well neither did I so let me enlighten you.  Basically many people in Nome Alaska came down with diphtheria and required a life saving serum, the nearest supply of which was located over 1,000 miles away in Anchorage.  Several dogsled teams worked together to get the serum to the people as quickly as possible by working together.  At this part in the story I always stress how important teamwork is and isn’t is nice how they all worked together, blah, blah, blah, you know things moms should say.  As a side note, Cody has now been asking for a Siberian Husky as a pet much more often than his old standby, the peacock. 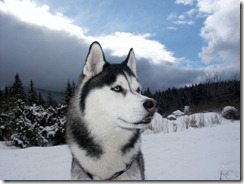 So back to lunch.  Husband, who was working out of the house and had the pleasure of dining with us, tells him that diphtheria is a disease.  In true inquisitive five year old form Cody wants to know what other diseases there are.  I start talking about such fascinating diseases as malaria, the bubonic plague, Ebola, and cholera.  I thought I showed great self restraint by not going into detail about cholera cots, an image that has forever been burned into my mind by my infectious disease college professor over ten years ago.  Husband brings up influenza and the common cold.  How, well, common.  So as not to end our lunchtime conversation of diseases on a dull note, I bust out with elephantiasis.

Elephantiasis is really quite interesting or rather filarial elephantiasis is.  In a complex interplay; microscopic pathogenic worms are injected into a human via an infected mosquito and move into the human’s lymphatic system where it breeds and grows.  Within the worms reside a bacteria that, when the worms die and decay, are released into the bloodstream.  So your lymphatic system not only gets all clogged up by the procreating worms but your immune system continues to freak out causing a chronic lymphatic inflammatory response.  The body increases the production of connective tissue resulting in thick and hardened skin and gross enlargement of  mainly the lower extremities.

So that is how during our lunchtime conversation we came to talk about massive scrotums, large enough to sit on that required the use of a wheelbarrow to aid in mobility. 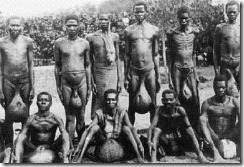 Seriously, do other people have such interesting lunchtime conversations or is it just us?

I am an elementary school teacher, a former microbiologist, a mom to a herd of two boys, and a grilled cheese sandwich and beer connoisseur.
View all posts by Shoes →
This entry was posted in Little Feet and tagged Children, Conversations, Elephantiasis, Infections Diseases, Parenting. Bookmark the permalink.