Yesterday was our first Annual Summer Pie Day.  After breakfast we grabbed some buckets and bowls and walked to our neighborhood blackberry patch, a place the boys have coined

Instead of saying stop picking in reference to his nose, I told Carter

After washing and drying the berries, I got to work on the pie crust.  I had enough dough for a single pie crust already made and defrosted so all that was required was to roll it out and pop it in the pie pan.  There was a little dough left over that I gave to each boy.  A great fine motor/finger strengthening activity for Cody, the boys enjoyed making little pies and snakes with the 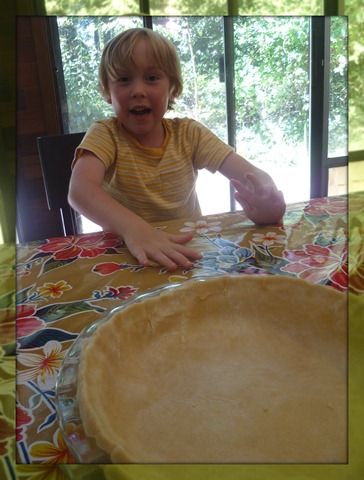 I partially prebaked the crust to avoid the dreaded soggy bottom crust that can occur with berry pies, allowed the crust to cool and then put a nice layer of fresh berries inside.  The topping was a sweetened mixture of sour cream (sour cream, eggs, sugar, flour, vanilla extract, and orange zest) with a dusting of brown sugar streusel.  The recipe is from Ken Haedrich’s book simply titled Pie.  The pie I made was

With the pie left to cool, I employed the boys to help me make the

In all there were six adults and five kids.  Since the day turned out to be hotter than expected, with temperatures into the 90’s, we busted out the wading pool and water toys.

There were water fights 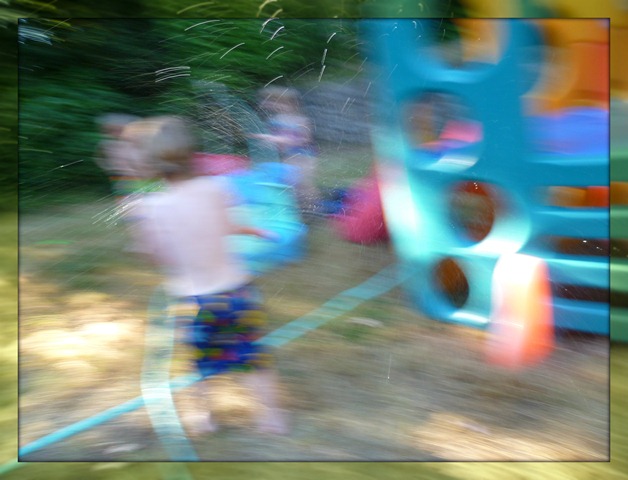 Husband was in charge of the grilling and it was

After a great meal, and a short walk in the neighborhood we were ready to eat pie.  There was my sour cream-blackberry pie, a blackberry-peach pie, a chocolate ganache pie, and a lemon meringue pie. 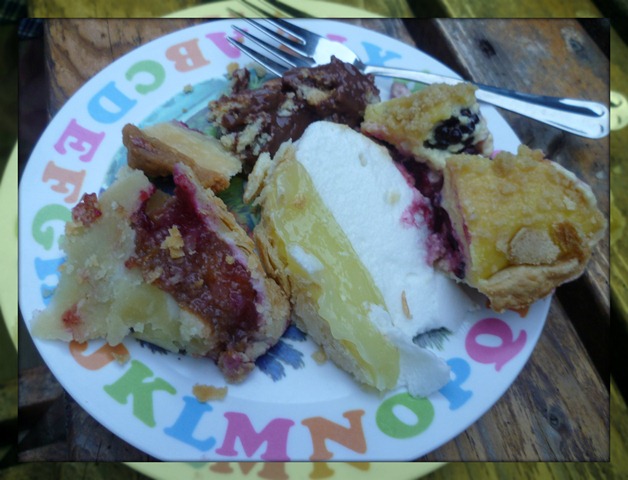 At the end of the night we divvied up the remaining pie so that everyone had a little of each kind of pie to take home with them.

I am an elementary school teacher, a former microbiologist, a mom to a herd of two boys, and a grilled cheese sandwich and beer connoisseur.
View all posts by Shoes →
This entry was posted in Simple Sunday and tagged baking, Children, Family, Food, Friends, Kids, Life, Pie, Pies and Pastry. Bookmark the permalink.