I don’t like fish.  They swim around and around, staring with their big unblinking fisheyes.  They don’t just quietly hang out, oh no, they lurk and lurking in my book is plain creepy. 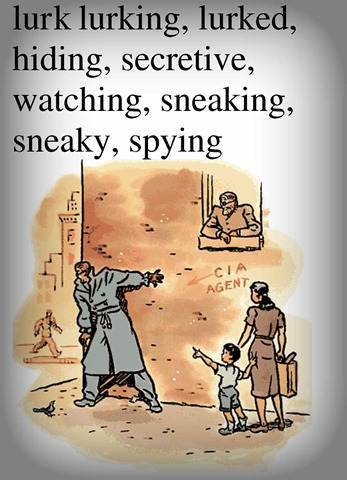 Fish.  They unnerve me mostly because I don’t know how they are feeling or if they need anything.  Maybe the fish are perfectly happy swimming to and fro. Perhaps they are simply bored and waiting for the great toilet bowl in the sky.  Maybe they are judging my lack of housekeeping, not only in my house but within their bowl.  It sure is getting awful scummy in here, lady.  Can’t you see that?  Could you at least scoop that dead fly out of my water?  Fish, I could do quite well without them.  But now there are two of them on my kitchen counter, watching my every move. 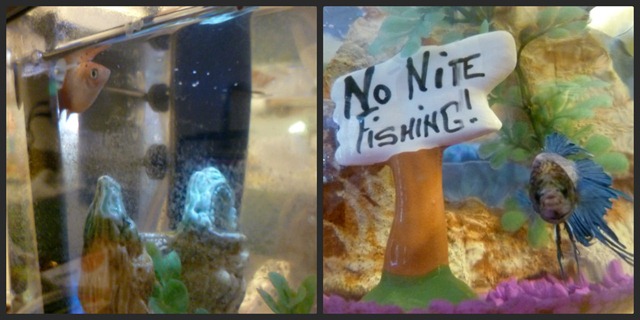 I have every intention of putting them in the boys’ bedrooms once we have some type of appropriate stands for them to be placed on.  For now, though, they lurk in my kitchen, two fish, one bowl and one tank.  They can not live together harmoniously in one container for one requires a filtration system, a heater, and a lamp and the other is a grumpy old sod.  For you see the fish we adopted could not have been something as easy as boring ole’ goldfish.  Nope, not us.  We have had, unsuspectingly thrust into our lives, a Tetra fish and a Betta fish.

Because I cannot do anything half-assed, I recently found myself researching these two types of fish.  Did you know that Betta fish are highly susceptible to fin rot?  I didn’t.  Their long and flowing fins are also very sensitive to rough edges.  If your fish has raggedy fins, your fishbowl bling could be to blame.  Finn, our Betta, has raggedy fins and a large rough looking rock in the middle of his bowl. 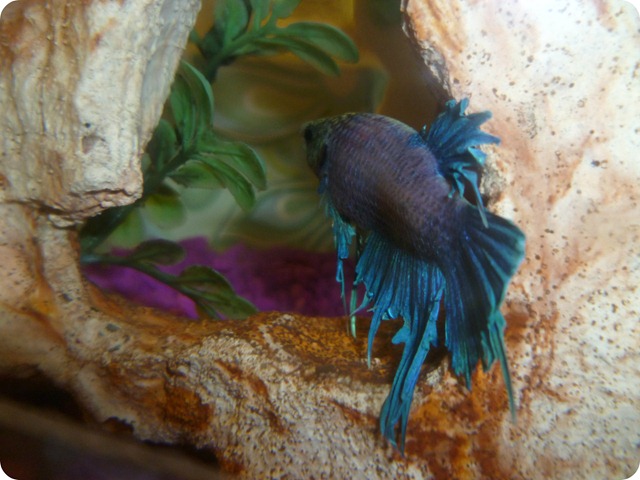 Now I have fish guilt and I didn’t even buy the offensive rock, he came with it.  I did catch myself inwardly cheering when I read that they only live 2-4 years in captivity.  I know our neighbors have had the fish for over a year.  Then I read that they have been known to live for up to ten years; the confetti fell flat, the balloons deflated, my inward cheering was abruptly cut off and replaced by silent weeping and head hanging.

My initial research on the Tetra fish was encouraging.  Some random website assured me that Tetra fish are “easy to care for” and “great for novice aquarists”.  Then I started reading about keeping their water pH just so, and their temperature just so, and their social interactions just so.  Wait, what?  Apparently Tetra should not be kept alone as it can cause them to feel stressed.  Maybe that’s why Speedo moves aimlessly about his tank, a fish without friends, a fish without purpose.  Crap, maybe we will have to buy him a friend.

I don’t like fish and this post was going to be all about why I don’t like them.  Since I enjoy adding pictures to my posts I took my camera over to the fish to snap some shots.  You know what happened?  Finn followed me around the bowl and actually posed for some photos. 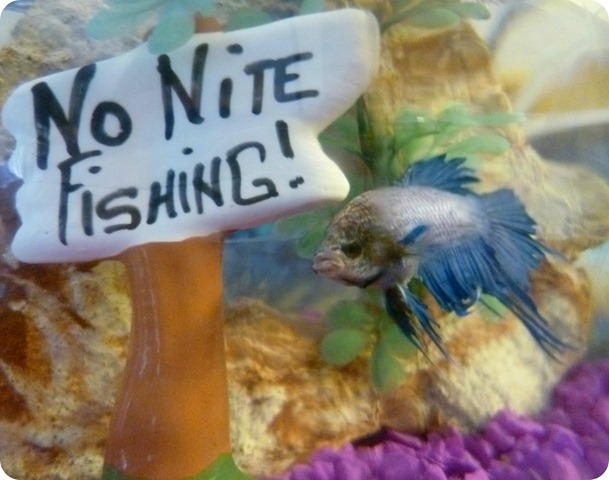 He seemed interested in what I was doing.  And then he clinched the deal by poking his little fish lips to the top of the water and blowing me a bubble.  (Did I mention that the lady at the pet store told me when I asked, that the strange bubbles on the top of Finn’s bowl means he is happy?  It is called a bubble nest.) 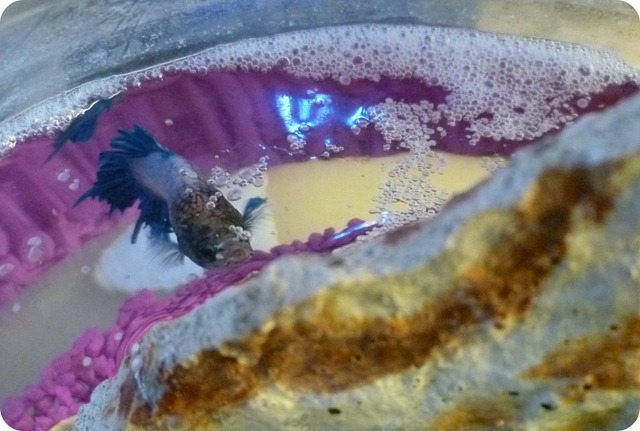 I have decided that I like Finn.  I still have guilt over Speedo’s depression but after we get him a friend (or two) maybe I will learn to like him as well.

By the way, Cody named Finn and Carter named Speedo.  The name Finn comes from the movie Cars II.  I do not think Carter named Speedo after the men’s underwear.  Carter is terminologically challenged when it comes to speaking of underwear and still refers to his boxers as “boxsters”.  It is so cute that I have yet to correct him.

I am an elementary school teacher, a former microbiologist, a mom to a herd of two boys, and a grilled cheese sandwich and beer connoisseur.
View all posts by Shoes →
This entry was posted in Furry Feet (and fish) and tagged Betta, Boxers, Boxster, Children, Family, Fish, Humor, Life, Pets, Siamese fighting fish, Tetra. Bookmark the permalink.