It is 82 degrees outside.  The boys are in various stages of undress, jumping over the sprinkler in the front yard and occasionally pausing to gnaw pieces of watermelon down to their mottled green rinds.   I should be doing something productive like vacuuming or laundry but I have very much missed blogging the past several days while my mom was in town visiting.  I thought I would tell you about a trip we took to the Nisqually National Wildlife Refuge.

We rolled into the parking lot around 10 am and were cheerfully greeted by this sign. 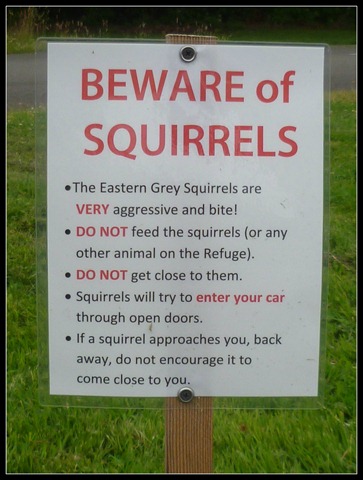 I texted Husband, who was at work, a picture of the sign and wrote In case we don’t come back you know what happened.  One can never be too careful.

He responded:  Oh my!  So while you’re backing away I wonder if you’re supposed to maintain eye contact with the squirrel or avert your eyes…  That man asks some good questions.

We paid our three dollar entry fee and everyone except Carter, who adamantly insisted that he did NOT have to go, used the bathroom before heading out onto the walking trails.  Or we tried.  The beginning of the trail was temporarily closed and so we were diverted to a dirt road.

It was a short detour and before long we were back on the main trail heading to the twin barns observation platform.  I have a love of all things that even resemble old barns or farmhouses so I will try to hold myself back and only post a few pictures of these lovely barns. 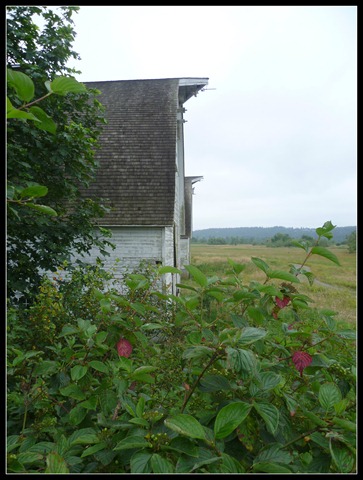 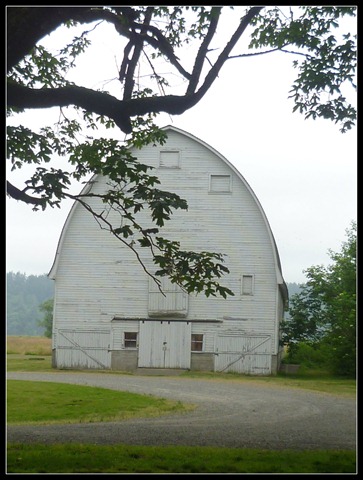 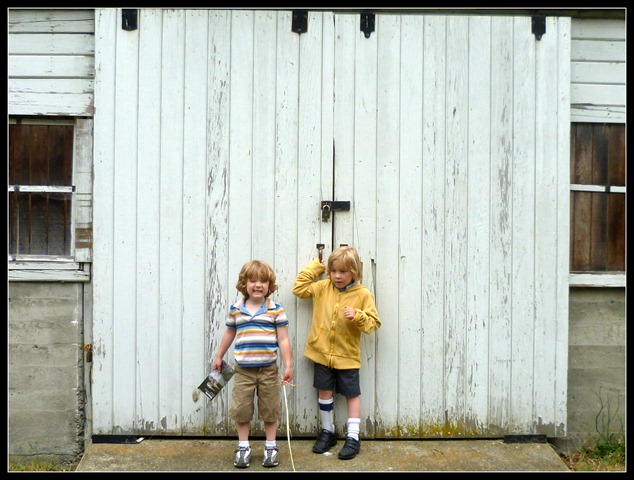 The wildlife refugee is a wonderful place to view many types of birds in their natural habitat and as such the place attracts numerous photographers of the slightly stodgy and relatively serious variety.  Some of them don’t take too kindly to loud and romping boys.  Knowing that my walking companions would not help in providing the best environment for wildlife photography, I instead focused my attention (and my camera) on random wildflowers, my rational being that the poor flowers are rooted to the spot and cannot run from us.

I did spy a small rodent-like creature with a long furry tail that darted out into the trail twice.  By the time I thought to get my camera out the boys came stampeding around the bend and the critter disappeared for good.  I proclaimed it to be a weasel.  I didn’t think I had ever seen a weasel and I was not sure if they even lived in these parts but it was exactly as I would have imagined a weasel to look.  I did not have time to express my excitement over my weasel sighting however because Carter started doing the dance, you know the one, and we had to sprint to a nearby port-a-potty.  After the nearly-disastrous-he-almost-didn’t-make-it-in-time bathroom trip we caught up with Cody and my mom.  While we were rushing along the trail I saw this.

The trip was a lot of fun and the boys held up very well throughout the one mile loop trail.

Carter said that his favorite part was some small ferns he saw growing out of a large tree.  Cody found the skunk cabbage to be the highlight of the outing because they make their own stink.  They were not in bloom and therefore were not stinky but he did not care. 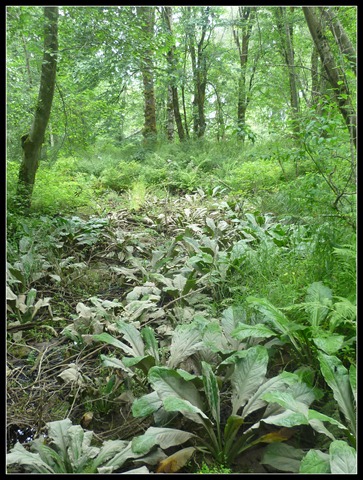 Our dog makes his own stink too but I guess it is way cooler when plants do it.

We were at the end of the trail with the parking lot in sight when what should we see leap from the bushes and into the middle of the path but a large gray squirrel.  Since the sign did not make it clear if we should avert our eyes or stare the mighty beast down we tried both.  It looked us over, determined that we did not have any snacks, and skittered away.

Whew, talk about a close call.

I am an elementary school teacher, a former microbiologist, a mom to a herd of two boys, and a grilled cheese sandwich and beer connoisseur.
View all posts by Shoes →
This entry was posted in The Great Outdoors and tagged Barns, Children, Humor, Kids, Life, Nisqually National Wildlife Refuge, Parenting, Photography, Squirrel, Weasels, Wildlife. Bookmark the permalink.