Sleeping with the Circus

For Christmas Husband and I got the boys a small circus tent from IKEA.  The circus tent is really very small and Cody and Carter are really much too big but it was on super sale.  After going into and out of the tent a couple times on Christmas day, the boys lost interest in it and we ended up shoving it into their playroom.  There is sits taking up a lot of space and looking as glum as a forgotten mini circus tent can possibly look.  Over the weekend, however, all that changed.

A good friend of ours who has twins the same age as Cody came to visit.  An hour or two before they were to arrive I stood looking at the cramped playroom and trying to imagine the space that three six year olds and one four year old would require.  The playroom is small and with that behemoth of a mini circus tent there was not much floor space.  I tided up some and then Husband drug the circus tent into the boys’ bedroom and crammed it into the book nook. 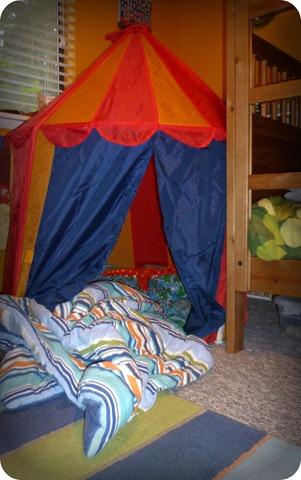 That night as the boys were getting ready for bed, Carter announced that he would sleep in the circus tent.  From there on out it has been a seemingly never-ending downward spiral of sleep interrupted nights.

Night one:  Carter filled the tent with stuffed animals making its very tight quarters even tighter.  Husband and I did not think it would last more than a couple minutes.  When we went to check on the boys a few hours later we discovered a crashed out Carter, knees tucked up, blanket tossed aside.  We draped a couple blankets over him and tiptoed out, oohing and aahing over how cute he was. He was not so cute at 12:30 am when he repeatedly called out momma, Momma, MOMMA until I came stumbling to his rescue. He was cold and wanted to get in his bed.

Night two:  Carter once again wanted to sleep in the circus tent.  We talked about how he was not to wake me.  If he wanted to move to his bed he could do so on his own.  I gave him a comforter to keep him warm and tucked him in. Once again Husband and I peeked in on the boys to find an angelic Carter snoring away, perhaps dreaming happy cotton candy circus dreams. In the wee hours of the morning I heard the cry – momma, Momma, MOMMA. This time the comforter had fallen off one of his legs and he was just too tired to reach over and fix it. I think I said something along the lines that he could either wake up enough to fix it himself or sleep with one cold leg before I huffed back to my bed.

Night three:  The third night of the mini circus tent sleeping fiasco, Cody expressed interest in sleeping in it. At this point I was so over the entire circus tent but Cody had not had a chance to sleep in the tent and I do try to keep things fair.  After making sure Cody could reach his water bottle, could see his clock, and could reach his white noise machine from the comfy confines of the stripped fabric awning he was ready to go to sleep.  His pajama covered footie feet were poking out the opening when Husband and I went to check on him that night.  He made it until about one in the morning.  This time I was woken up by a very apologetic Cody who was whispering momma, momma, momma inches away from my face.  He wanted to move to his bed and had already moved his pillow, blanket, and stuffed Kissy Shrimp but since we had moved his bedside table next to the tent, he did not know where to put his water bottle.  Sigh.  I helped him solve the problem and tucked him back in.  As I was leaving his room he whispered, Momma, I am sorry I woke you up.

Tonight is night number four.  Cody was unimpressed with the accommodations of the mini circus tent and wants only to sleep in his bed.  Carter, however…

Why can’t I just say no?  Because if I was a kid I would want to sleep in that cozy mini circus tent.  You are only a kid once and a mini circus tent is a rather magical space to sleep.  I will give it another night or two.

I am an elementary school teacher, a former microbiologist, a mom to a herd of two boys, and a grilled cheese sandwich and beer connoisseur.
View all posts by Shoes →
This entry was posted in Little Feet and tagged Children, Circus tent, Family, Home, Humor, IKEA, Kids, Life, motherhood, Sleep. Bookmark the permalink.

13 Responses to Sleeping with the Circus